bulldogs.com.au takes a look make at some significant moments in the Bulldogs NRL career of Josh Reynolds as he prepares to play his final game for the club this weekend. Round 11, 2011 – After growing up and idolising the likes of Terry lamb and Jim Dymock, Josh Reynolds, a local junior made his NRL debut for the Bulldogs against the Canberra Raiders in Canberra. Reynolds’ first game was in the number nine jersey, but unfortunately the Bulldogs went down to the Raiders, 20-12. Round 15, 2011 – Reynolds scored his first NRL try against the Cronulla Sharks at ANZ Stadium. Wearing number 21, Reynolds crossed for his maiden try just before half time after exchanging passes with Sam Kasiano. 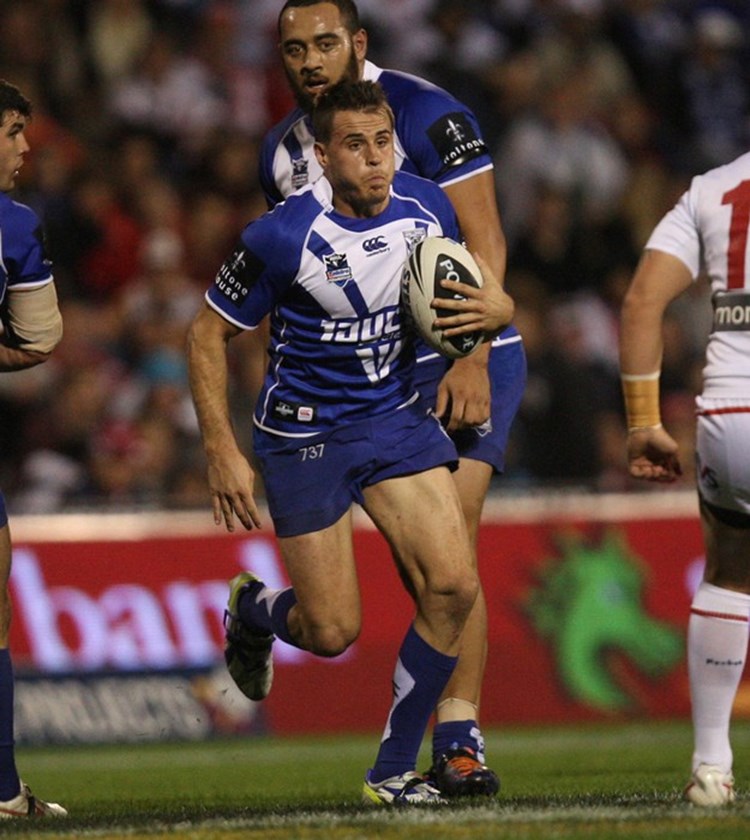 Round 15, 2012 – Wearing the number six jersey in his 24th career match, Reynolds scores two tries in the Bulldogs 28-20 win over the St George Illawarra Dragons in Wollongong. 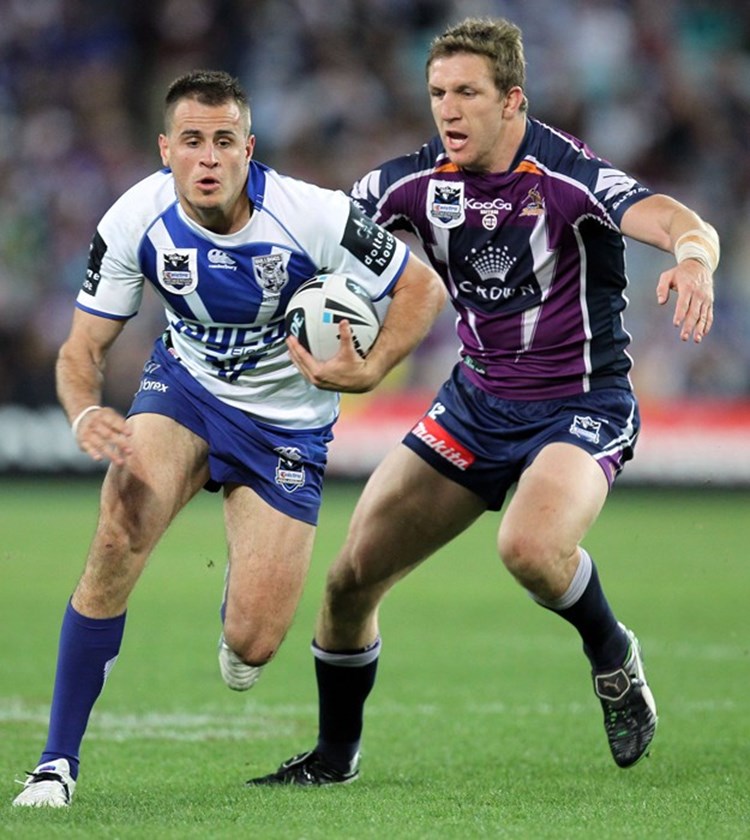 Reynolds was the five-eighth in the Bulldogs Grand Final team that went down to the Melbourne Storm, 14-4. Reynolds finished his impressive 2012 NRL season playing in all of the Bulldogs 27 matches and scoring 10 tries. Round 14, 2013 – Reynolds played his 50th NRL match against the Manly Sea Eagles at Brookvale Oval. Wearing the number six jersey, Reynolds scored a try in the Bulldogs 32-30 victory over Manly that saw Trent Hodkinson kick a penalty goal in golden point extra time to give the Dogs a two point win. 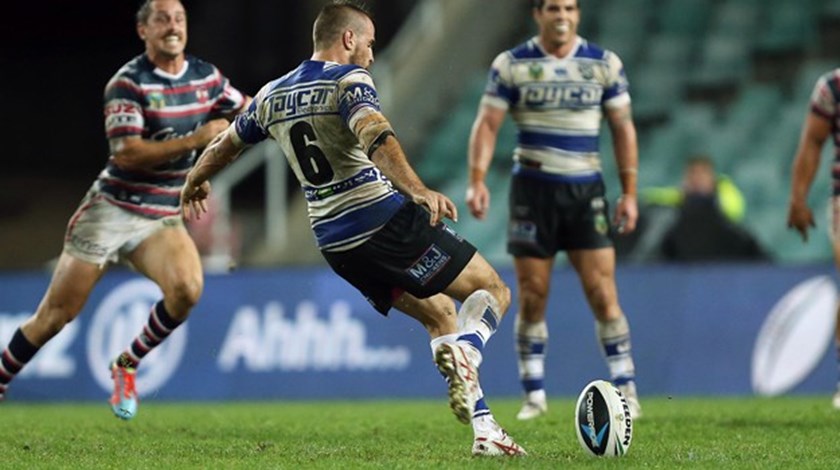 Round 5, 2014 - Five-eighth Josh Reynolds came up with two super plays in the Bulldogs 9-8 win over the Sydney Roosters at Allianz Stadium. He first came up with a try saving tackle on Roosters winger Daniel Tupou, before slotting a 20 metre field goal in the 70th minute to give the Bulldogs a one point victory. Reynolds was a member of the Bulldogs Grand Final team that went down to the South Sydney Rabbitohs, 30-6. He finished the season having played in 19 matches and scored two tries. 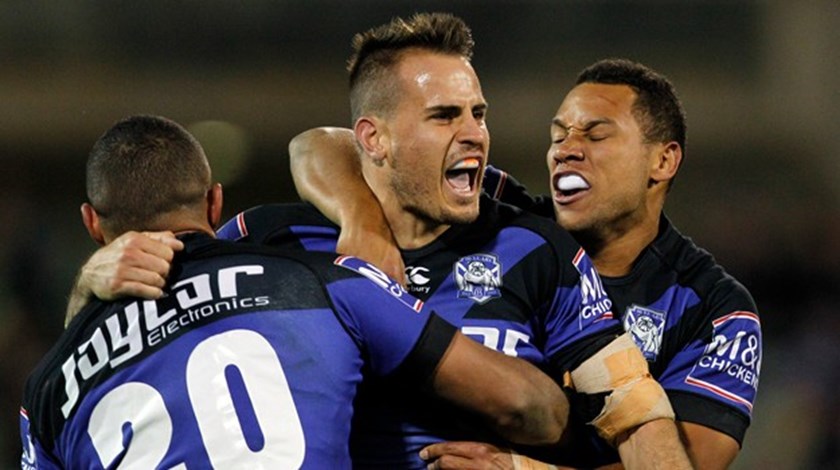 Round 11, 2015 - Reynolds finished with a double and broke a 34-all deadlock with a field goal with just 31 seconds left on the clock in the nation’s capital. Canterbury then scored a final try off the last play of the game to seal a 41-34 victory. The Bulldogs escaped with the points after leading 26-0 in the first half. Finals Week 1, 2015 - A Josh Reynolds field goal gave Canterbury a nail-biting golden-point 11-10 win over the St George Illawarra Dragons at ANZ Stadium in week one of the 2015 finals series. The Bulldogs' five-eighth stepped up to the mark and slotted the winner from 20 metres out to eliminate the Dragons. 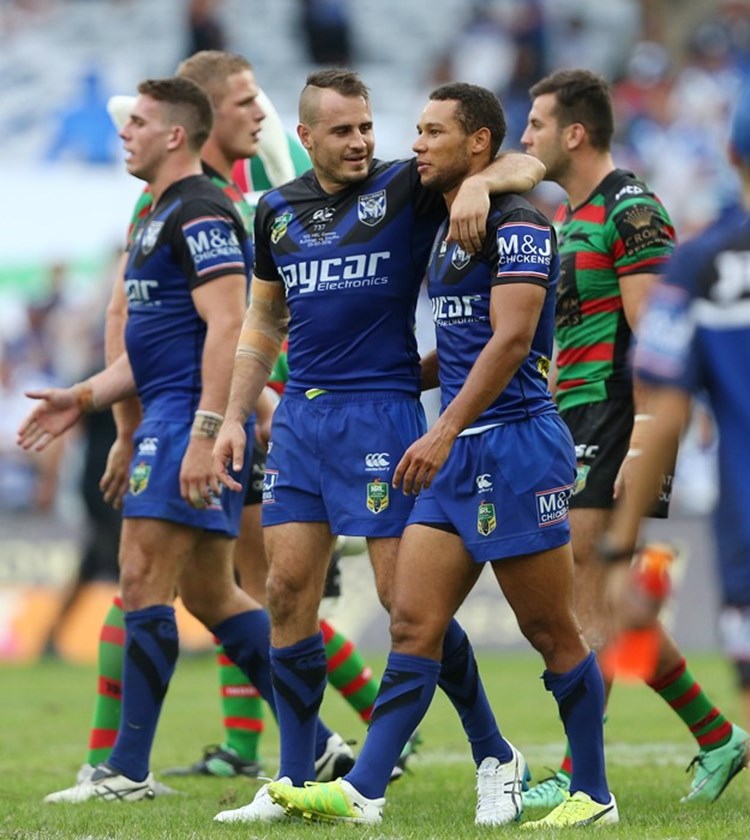 Round 4, 2016 – Reynolds celebrated his 100th NRL match with 42-12 win over the South Sydney Rabbitohs on Good Friday. Played in front of more than 38 thousand fans, Reynolds kicked beautifully, didn’t over play his hand and played with plenty of energy. The game also saw Josh Morris celebrate his 200th NRL match. 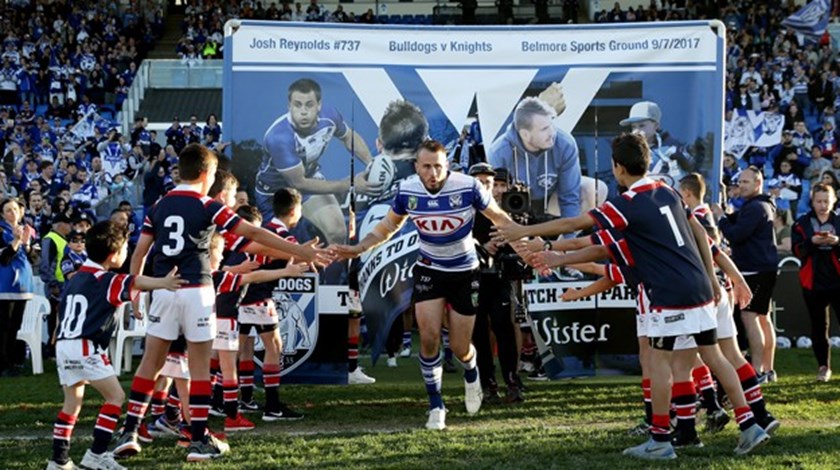 Round 18, 2017 – The Bulldogs were able to send Josh Reynolds off with a farewell he thoroughly deserved. It looked like the Knights would spoil the party with five minutes to go, before his teammates rallied to ensure the inspirational pivot would depart the suburban ground a winner. Emotions ran wild pre-game with an emotional Reynolds hugging his mum twice as he led the side out onto the field, but chaos reigned at full-time and Reynolds was chaired off the ground. 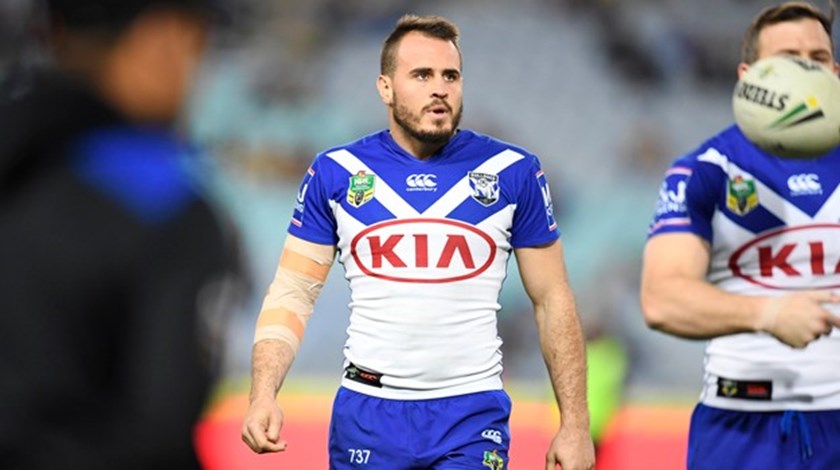 Round 26, 2017 – After seven NRL seasons with the Canterbury Bankstown Bulldogs, Reynolds will play his final home game for the blue and whites this Sunday against the St George Illawarra Dragons at ANZ Stadium. A local junior who grew up in Belmore and a lifetime of memories, Reynolds will farewell our members and fans who he has had a close connection with ever since he pulled on a Bulldogs jersey this weekend.