Canterbury have pulled off a stunning comeback with two tries in the final five minutes to beat Newcastle 20-18 at Belmore Sports Ground.

It was a spirited performance from the Novocastrians who trailed by eight points early before piling on three tries to take a 10-point lead, before the Bulldogs struck a double blow in a stunning fashion to send inspirational five-eighth Josh Reynolds out a winner in his final game at Belmore.

A converted try with four minutes left on the clock to a flying Marcelo Montoya set up a grandstand finish before Moses Mbye raced 70 metres after latching onto a Brock Lamb kick secured the win.

Newcastle had a chance to level up the game on the stroke of full-time but a penalty attempt from Lamb fell well short.

The experience of Trent Hodkinson and Jamie Buhrer in the Knights line-up came to fruition at the backend of the contest and the visitors' confidence grew the longer the game went on and looked to have pulled off the upset.

Canterbury held a two-point lead at the break despite making five line-breaks to dominate the opening half with a 56 per cent possession rate, however could not turn several chances into points.

Newcastle were forced to defend for majority of the first stanza with the Sydney sun in their eyes and struggled with the Bulldogs spreading the ball on the edges early.

Offloads were also on the agenda for the home side with starting forwards Raymond Faitala-Mariner and Sam Kasiano causing the visitors headaches with three apiece.

Englishmen Joe Wardle coughed up the ball coming out of territory for the visitors and the Bulldogs took just two tackles to send former Knight Kerrod Holland over in the eighth minute after some quick hands from Will Hopoate.

Canterbury continued to pepper the Knights' left edge and should have crossed through stand-in skipper Aiden Tolman – only for Knights fullback Nathan Ross to conjure up a ball-and-all tackle close to the line.

The Bulldogs broke through the line via Mbye shortly after but were again denied with some scramble defence from the visitors.

Newcastle repelled yet another Bulldogs charge with Josh Morris losing the ball over the line as Brendan Elliot did well to force the error and come up with the try-saver.

Knights lock Mitch Barnett made a clumsy effort to get in the way of Reynolds in a kick chase and conceded a penalty with Des Hasler's side opting to take the lead out to eight with a penalty goal from next to the posts.

Newcastle got on the board on the stroke of half-time through Peter Mata'utia when the former Dragon took a quick tap and raced 10 metres to barge his way over.

Scores were soon level seven minutes into the second half when the Bulldogs were penalised against the run of play for being offside around the ruck.

NRL debutant Andy Saunders couldn't grasp an opportunity when Chase Stanley cut back on the inside of play and the Knights went up-field on the back of a penalty.

Hodkinson provided a lovely cut-out pass for Chanel Mata'utia to go over untouched for his first four-pointer in the Telstra Premiership since Round 25, 2014.

The Knights slowly began to turn the screws on the Bulldogs with a weight of possession and Hodkinson was in on the action again to place a deft kick for Peter Mata'utia to race through and get the ball down.

Newcastle broke through via Nathan Ross but the fan favourite spilled the ball that allowed the Bulldogs a chance with 11 minutes remaining.

Canterbury received some luck with a knock-on call nine minutes out from full-time but the momentum was short-lived when Wardle levelled Matt Frawley with a monster hit to force the ball loose, before the Bulldogs made sure Reynolds' final game at Belmore proved a memorable one. 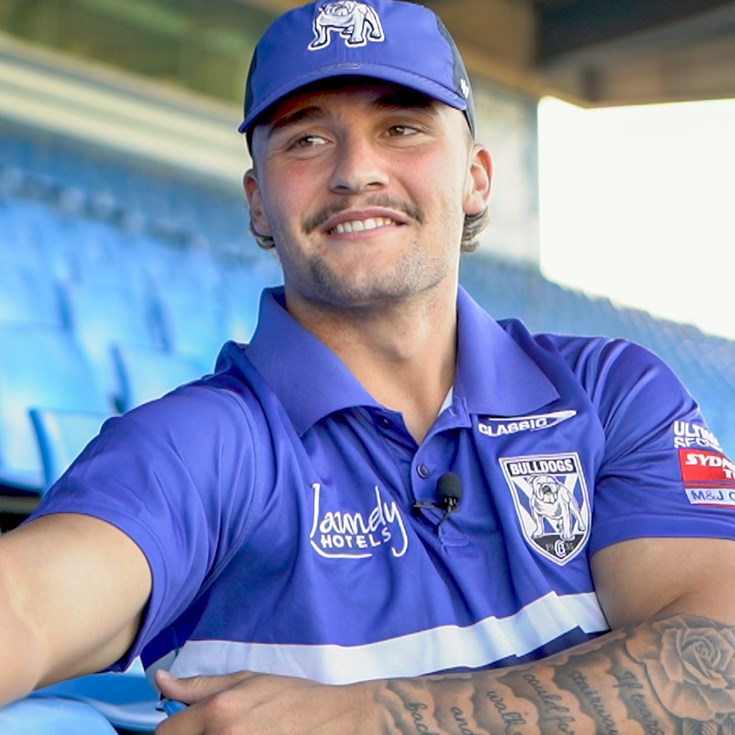