Elianna Walton, the most capped Jillaroo player ever is the 2016 winner of the Karen Folkes Award for her dedication, commitment and outstanding contribution to Rugby League in the Canterbury-Bankstown District.

Walton, who plays at prop/lock was first selected for the Jillaroos in 2008, and has been a mainstay of the side ever since. She is also aiming to become the first woman to represent Australia for 10 years. 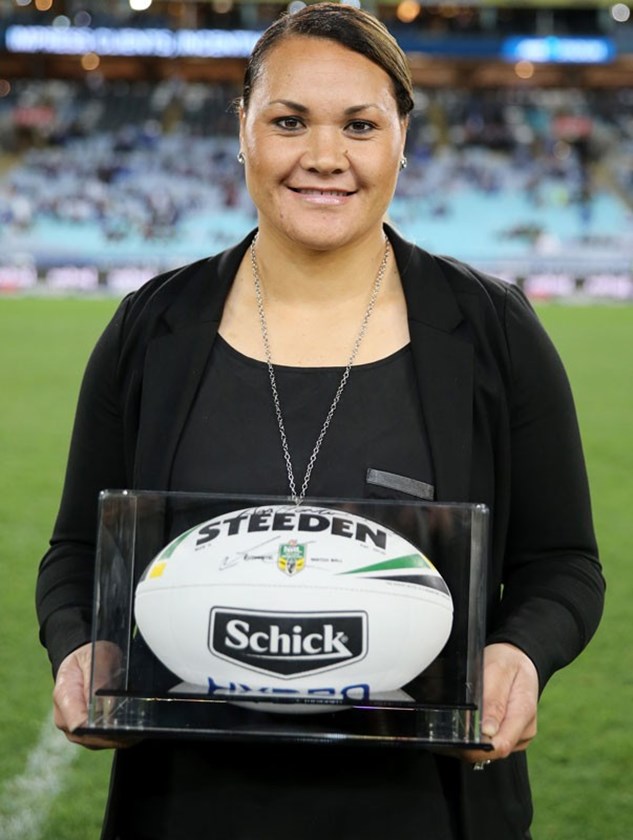 She’s also captained the NSW side and after coming back from injury was vice-captain of this year’s team that beat Queensland for the first time in 17 years.

Last year Walton captain coached Greenacre Tigers to a premiership in the Sydney Metropolitan Womens Rugby League competition and has the team on track to defend their title this season.

And just in case too much Rugby League is not enough, Walton is also coaching her son in the under 6 St George Dragons.

Somehow in the midst of all the coaching, playing and elite level training 31 year old Walton also works full time as a support worker for adults with disabilities. Her passion for the game is inspired by a grandmother and mother who both played and by the bonds formed on the field.  The eldest of seven, Walton also has three sister and two brothers playing the game.  Needless to say, there’s nothing her 9 year old daughter doesn’t know about the game and has aspirations of managing Rugby League teams.

“The best thing about playing Rugby League is that it’s a game for everyone.  It doesn’t matter about your shape, your size, your culture – we just have a real sisterhood on and off the field.  We build a great rapport and the friendships follow.  It’s just the best game of all!”

Walton started playing when she was 15 years old alongside her mother in the Brisbane open women’s competition and her mother remains her biggest supporter.

“She flew over from Auckland to watch our Test on the Gold Coast this year.  I always have to call her before I play, she helps calm my anxiety.  She tells me to put up a good fight and wrestle and to get up off the ground quicker. Dad doesn’t say too much, he just asks me if I’m ready.”

Bulldogs CEO Raelene Castle says there couldn’t be a more fitting winner of the annual award.  .

“Elliana plays at the elite level, she volunteers at the grassroots level, she has an incredible passion for the game and is a great role model to have involved with Rugby League in our district,” Castle said.

“We’re really glad this Karen Folkes Award gives us an opportunity to showcase Elliana’s achievements because she’s a genuine legend of our game.”

Presented by
14 hours ago