Households across Australia have the sign 'Beware of the Dog' emblazoned on the front fence. According to Bulldogs players, it's a warning that wouldn't look out of place in Belmore.

After a lean start to the year that eventually saw him demoted to the Intrust Super Premiership, Tony Williams returned to his destructive best with a brutal 51-minute effort for the Bulldogs in the Queen's Birthday win over the St George Illawarra Dragons.

Touted as one of the most damaging ball runners in the competition, Williams was well below par in a number of matches in 2016; his 42 metres in the Round 9 loss to Parramatta the final straw for Bulldogs coach Des Hasler.

The former NSW Blues representative was forced to bide his time in reserve grade before suffering a hamstring strain to cap off a tough month of football for the player dubbed "T-Rex'.

Instead of fading away into the annals of history like the dinosaurs of an era long gone, Williams fought back, making the most of an opportunity when teammate Adam Elliot was ruled out of the Round 14 game with injury.

It was the opening he needed. Williams ran for a season-high 182 metres, made a line break and came up with his first try assist of the season.

One game doesn't make a player, but the signs are there that the former Kangaroo is on track to return to his best.

Having seen his teammate forced to fight for redemption, Bulldogs hooker Michael Lichaa believes Williams's demotion to reserve grade was the wake-up call T-Rex had to have.

"You don't really know what you've gone until it's gone. Getting dropped might have scared him a bit," Lichaa said.

"It was hard to watch him out of the team for the couple of weeks that he was. He was obviously pretty upset, but to bounce back the way he did was unbelievable. When he came on the field he changed the whole game for us.

"If he plays like that every week then he can be one of the best forwards in the game."

It was a sentiment shared by Bulldogs skipper James Graham; the Englishman of the belief that Williams would stay in first grade if he maintained the rage that saw him dominate the Red V.

"Performances like that are going to stand him in good stead for playing week in week out," Graham said.

"He was very highly motivated to come back and show the boys what we've been missing.

"I thought he was outstanding against St George with the way he came off the bench and carried the ball. He really rolled back the years and got back to his best."

Williams seemed to relish his role coming from the bench against the Dragons, and it's something teammate Moses Mbye believes will suit him going forward.

"When he comes on, he causes some destruction off the back of our other big boys so I guess the heat of the game dies off after 20, he can come on then and hopefully skittle a few [opposition players].

"It was a warm welcome back for T-Rex back in the top grade. He's admitted himself he's probably been down on form over the last couple of years but he returned in the top grade and he really turned it on.

"I think the quote from him was he put on his best performance so we're expecting a big game from him as well this week."

While it was his numbers from a fortnight ago that people should remember, it was his 'Hand of Dog' try assist that ended up being the biggest talking point of the round.

Contrary to belief that it was an accident, fellow enforcer Sam Kasiano said it was in fact a well-rehearsed move.

"I've seen him practice that for the last couple of weeks," Kasiano joked.

"He was our best player against the Dragons." 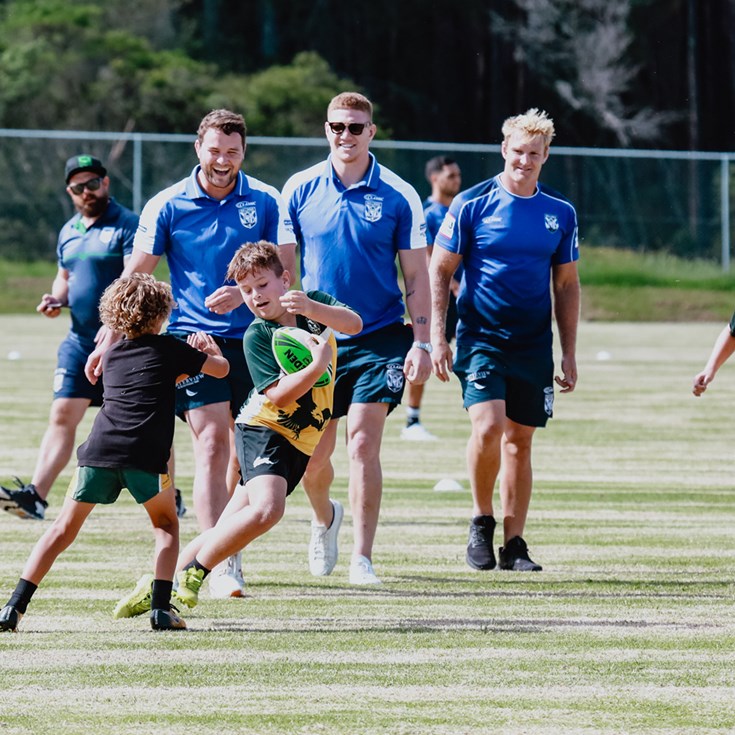