An exhausted Maroons outfit has held on in a scoreless second half to edge out a dour State of Origin series opener 6-4 at ANZ Stadium on Wednesday night.

Both sides failed to convert their only try, meaning a Johnathan Thurston penalty goal was the final difference on the score sheet.

Laurie Daley's new-look attacking Blues outfit presented a polished kicking game for most of the game and did a lot right in the middle third of the field but despite a mountain of second half attacking ball couldn't find the killer blow to put the necessary try through the Maroon defensive wall.

Blues halves Adam Reynolds and James Maloney kicked well – Reynolds in particular – while fullback Matt Moylan had some slick moments slotting into attacking plays, but a well-drilled Queensland outfit was able to handle everything the Blues threw at them.

Senior men Johnathan Thurston and Cooper Cronk were slightly off with their kicking game for most of the night while Blake Ferguson in particular handled those kicks well. Moylan had some shaky moments under the high ball in a mixed debut.

The Blues' vaunted massive bench saw a late change with James Tamou starting for Greg Bird but like everything else the Maroons handled the challenge. Andrew Fifita had some massive charges when he was injected shortly after half-time and produced some quality offloads to justify his return to the arena.

The most puzzling selection of the series opener – that of Manly back Dylan Walker on the Blues' bench – became only more puzzling after the game. He was held back until the 70th minute then injected with the game on the line. He had few involvements and the only decisive one was a poor error – electing to place the ball on the marker's hand in the play the ball in an attempt to milk a penalty and losing the ball in the process to effectively end the game with two minutes remaining on the clock.

On this occasion, Queensland's utility – Cowboys pivot Michael Morgan – had an unhappy night himself, being taken off concussed after a 20-minute spell and not returning.

Following the usual fiery opening exchanges, NSW made life hard for themselves in the early part of the first half with a few errors – two of them absolutely fundamental ones – conceding field position and possession when they needn't have.

However at the times they got the basics right they made life hard for the Maroons rather than themselves and were somewhat unlucky to be trailing by two at the break.

Defence was strong from both sides which made the fact both tries scored in the opening 40 were fairly soft even more of a surprise.

Having profited early from one of those two critical errors – a dropped ball in the process of a penalty tap from Josh Morris to heap pressure on the Blues – NSW would have been relieved to only concede a penalty goal to Thurston from the opening 15 minutes of pressure.

Despite immediately adding their second schoolboy error – a miscommunication between Moylan and Ferguson to let a regulation downfield kick bounce and somehow concede a line dropout – a Thaiday error handed the ball straight back and the Blues regained their composure.

On the back of a polished kicking game from Reynolds (and a few well-judged long kicks out of dummy-half from Farah) the Blues started to turn the screws on the Maroons.

The Blues earned five straight sets between the 18th and 25th minutes and capped it with a nice short ball from Maloney to a hard-running Cordner to crash through on the Blues' left edge, although sharpshooter Reynolds missed the tricky but gettable conversion.

Queensland continued to struggle to exert pressure through their kicks and probably could have conceded more points on their right edge had Justin O'Neill not pulled off some good reads on Jennings.

The second try of the half came almost against the run of play as the Maroons halves decided to spread it right on the last from 25 metres out and managed to create an overlap for Dane Gagai to score and make it 6-4 at the break.

A huge Blues set in the 55th minute – which all started with a late Josh Mansour offload to Moylan – got the Blues rolling downfield in a big way and a great last tackle kick from Robbie Farah forced one of his many drop out restarts of the night.

From there, 10 minutes of extreme pressure saw the Maroons just hang on at their own try-line time and again until Josh Morris crashed over in the 66th minute but the bunker found evidence he had grounded the ball short of the line and that was as close as they came to claiming the lead.

With Queensland out on their feet in the final 10 minutes the Blues had every chance to press their claims but in true Queensland fashion they somehow found the energy to hang in and close out another Origin win. 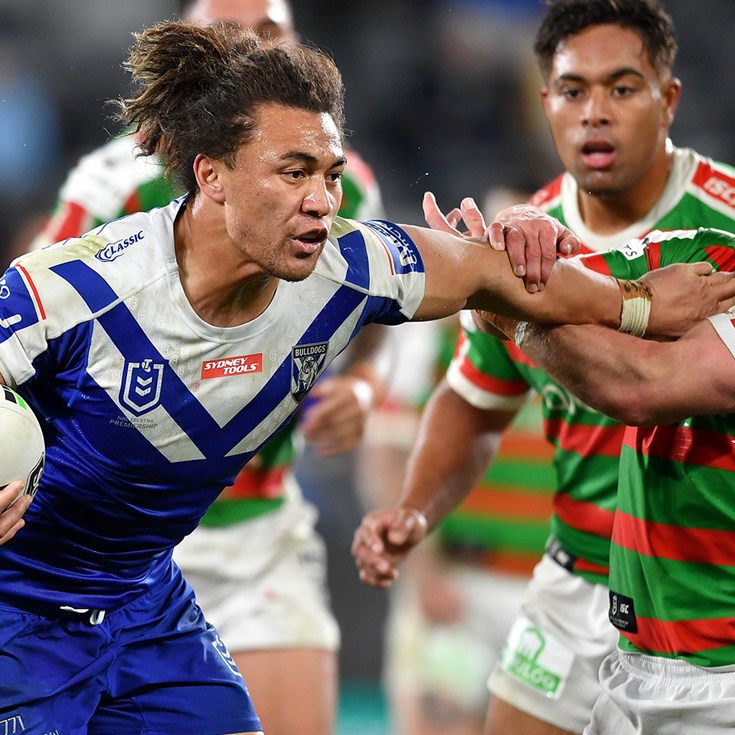 Thompson excited to wear the blue and white jersey

Thompson committed to giving his all for the club