An impressive Parramatta side has ground out a 20-6 win over previously unbeaten Canterbury at ANZ Stadium on the back of brilliant defence and some Semi Radradra magic.

The unheralded blue and gold pack had the measure of their more fancied opponents throughout, keeping Des Hasler's men scoreless until a late consolation try with the result long since decided.

Both sides soaked up a mountain of pressure in the first half before the Eels' prolific offloading and elusive outside backs started to run the blue and whites ragged towards the end of the game.

Despite losing hooker Nathan Peats (elbow) and form back-rower Manu Ma'u (suspension) from last week the Eels were well served as Isaac De Gois stepped up and young lock Tepai Moeroa had his best game of the year to date, getting through a mountain of work in attack and defence.

Beau Scott was unfussy but tough and added plenty of starch to the middle while halves Kieran Foran and Corey Norman complemented each other well, the former adding plenty of direction and mental toughness and the latter continuing with his brilliant kicking and ball-playing.

The Dogs for the first time this year looked directionless in attack as some less than stellar service from back-up dummy half Craig Garvey and some poor options from halves Moses Mbye and Josh Reynolds stunted their attack.

A furious, fast-paced and high-quality opening 40 minutes was punctuated by impeccable goal line and scrambling defence from both sides with each being forced to soak up a mountain of pressure at different stages, high completion rates and a solitary try – arguably the best of the season so far.

The Eels were the first team under the pump as three quick-fire penalties saw the blue and whites camped at their line, from where Mbye forced goal line drop outs in consecutive sets (the second of those came when he ignored a three-on-one overlap and his side's best try-scoring chance went begging).

The Eels emerged from that unscathed with their right edge in particular soaking up plenty of attention from Canterbury and made a statement down the other end of the field.

A floating bomb from Foran looked to be sailing into touch on the full but just held up for a leaping Radradra to soar over Will Hopoate and come down with it and maintain the presence of mind to pop up a nice ball for centre Michael Jennings to score his first NRL try for Parramatta and a 6-0 lead after 13 minutes.

Radradra was denied a try of his own by brilliant in-goal defence from Reynolds, Chase Stanley and Hopoate shortly after and brilliant scrambling defence later in the half following a pair of half-breaks from Radradra and Jennings shut down what looked a certain Eels try.

A confident-looking Eels side was happy to throw the ball around on their way to 14 first-half offloads against Canterbury's three but their defence was also impeccable to keep their opponents scoreless at the break despite the Dogs holding 52 per cent of first-half possession.

The second half started with the same intensity of the first and next points came from a Dave Klemmer indiscretion, stripping the ball in front of his own posts to hand Gordon an easy penalty goal and 8-0 lead to the Eels 10 minutes into the half.

There was a touch of controversy just before the 60-minute mark – arguably the first involving the bunker – when a Sam Kasiano offload put Sam Perrett over in the corner.

Although the decision was sent up as a try the touch judge was of the belief the pass was forward and when the bunker confirmed no touch from Parramatta influencing the ball's path, the on-field suspicion of forward pass was confirmed, to the angst of the home crowd.

Dogs skipper James Graham was furious with the call and fresh intensity was injected into the game with increasingly physical tackles as the blue and whites became increasingly desperate.

The game was blown open with just over 10 minutes to go when Radradra skipped across field in his own end and combined with Kenny Edwards to send Jennings on a long-range run and with the Dogs retreating Norman skipped through the line and sent Radradra away to complete what he started at the other end of the field.

The result was all beyond doubt at 14-0 with five to go when Radradra blasted through the Dogs line to run away for his double and put an exclamation point on an impressive win.

Former Eel Hopoate finally got his side on the board with three minutes remaining though it was too little too late for Des Hasler's men.

This article appeared first on NRL.com 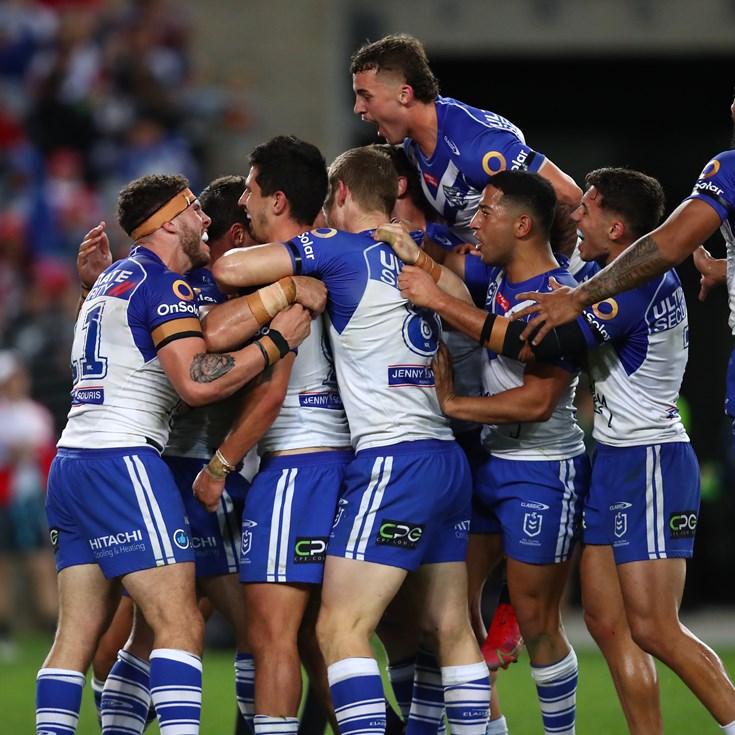