The 5 things you need to know about the round 16 clash between the Canterbury-Bankstown Bulldogs and the Melbourne Storm.

#1: THE RETURN TO BELMORE

The Bulldogs will return to Belmore Sportsground on Monday night for the first time in 17 years. Belmore has been the home ground of this great club since 1936 and after 552 games, the club said goodbye to Belmore in round 23 from the 1998 season.

The final game at Belmore was against the Melbourne Storm and in round 16 will do battle with the Storm once again. 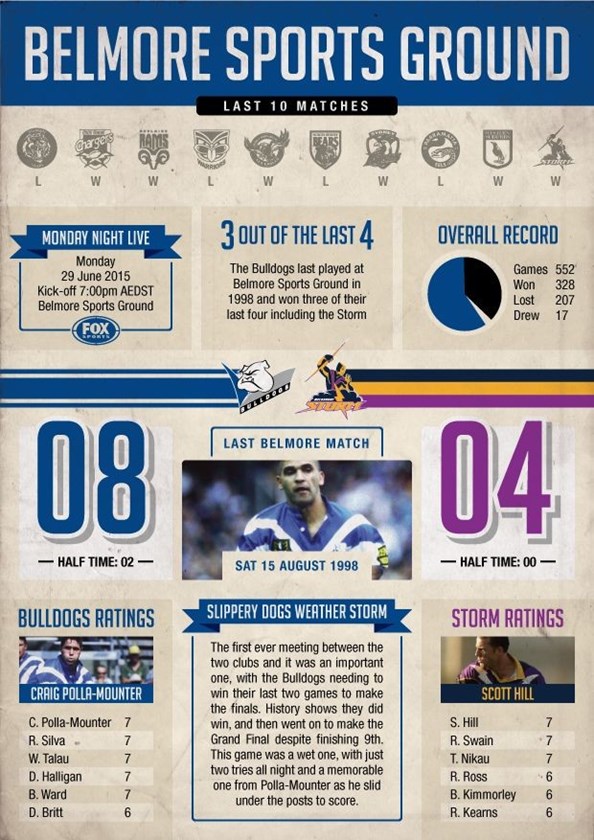 The Melbourne Storm only lost three of their first nine games to start the season, but since the begining of the Origin period and the loss of key personal have loss three of their last five games, including a poor performance against the Roosters in round 12 that saw Coach Craig Bellamy label the teams defensive performance, as soft as butter.

Dale Finucane and Blake Green both spent time in the blue and white jersey and on Monday night will make their return back to Belmore, but this time in the opposition colours.

Green joined the Bulldogs in 2010 after stints with the Cronulla Sharks and Parramatta Eels. He signed a two year deal with the club begining from 2010 and made his debut for the Bulldogs against the St George Illawarra on March 19, 2010 where he slotted in as starting hooker after regular hooker Michael Ennis was suspended, but left the club at season's end after 18 NRL games to join Hull KR in the English Super League. Finucane began his career at the Bulldogs back in 2009 when he played for the club's SG Ball side and saw him the SG Ball player of the year, as well as go on to represent the under 18s NSW side, before been promoted to the club's NYC side that saw him play over 60 games from 2009 to 2011.

Finucane then began the 2012 season in the Bulldogs NSW Cup side, before making his NRL debut for the club in round 13. Finucane finished the year by playing in the club's 2012 Grand Final loss to the Melbourne Storm.

The Bega born Finucane became a regular in the Bulldogs NRL side that saw him play 66 first grade games with the club, appear in the two Grand Finals (2012 and 2014), represent Country, before leaving the club at the the end of the 2014 season to take up a three year deal with the Melbourne Storm. Back-rower Josh Jackson will miss his first NRL game through either injury or suspension since making his debut back in 2012 after being hit with a grade 2 dangerous throw from the victory over the Panthers in round 15.

Jackson was looking at two weeks on the sideline, but was successful at the judiciary during the week in seeking a downgrade on a dangerous throw charge and therfore only misses one match and is available for selection for the NSW side for game 3.

Jackson has played 77 straight games for the Bulldogs since making his debut in round 16 from the 2012 season.

It's a remarkable effort from the talented Gulgong Terrier who has certainly made a name for himself amongst rugby league circles as one of the toughest back-rowers in the game.