In as dramatic a finish you’ll ever see in an NRL fixture, the Bulldogs were denied victory against the Rabbitohs in controversial circumstances.

Brett Morris passed a late fitness test on his calf to take his place at fullback while Josh Reynolds also returned to the side after spending a month on the sideline with a fractured arm. Reynolds started from the bench with last week’s match-winner Moses Mbye holding his spot at five-eighth. This saw Tim Browne drop off the bench.

In drizzly Good Friday conditions, Bulldogs were out to string together their fourth consecutive win after their Golden Point victory against the Tigers. It was a physical encounter which the Bulldogs dominated but in a match that had it all, Rabbitohs escaped with an unlikely 18-17 win.

Bulldogs had the best early chance with a fumbled bomb giving them a full set on the Rabbitoh’s line. They wasted no time in making it count with a loose ball finding its way to Curtis Rona who collected his sixth try of the season. This cemented his spot at the top of the competition’s try scorers list. Trent Hodkinson missed the conversion to the right leaving it 4-0 in the 7th minute.

From the kick-off the Bulldogs immediately shifted the ball to the right and a half-break from Josh Jackson ended with the second-rower being forced over the sideline. Rabbitohs were repelled in the ensuing set though.

Sam Perrett extended the lead in the 14th minute with a short side play on the last tackle featuring Hodkinson and Jackson giving Perrett enough space to evade one defender before sliding into the corner. Hodkinson made no mistake this time, opening up a 10-0 lead.

Bulldogs came close to collecting a third try in the 19th minute with Greg Eastwood hauled down by Greg Inglis after he looked certain to score. Eastwood found space again in the 20th minute putting his side deep into Rabbitoh’s territory. However, Rona dropped a long ball from Mbye to relieve the pressure.

Sam Kasiano dispelled any pre-match concerns about a reoccurrence of a hip injury with a strong first run in the 25th minute. With a 63% of possession rate, it was all Bulldogs up until this point.

Josh Reynolds was injected into the game in the 29th minute replacing Michael Lichaa but the hooker was recalled from the bench soon after with Tim Lafai being assisted from the field with a knee injury. This pushed Mbye into the centres.

Brett Morris came up with a huge play in the 35th minute, showing blistering speed to turn and outpace Alex Johnston who attempted to chip and chase for himself.

With just two minutes on the clock the Rabbitohs were gifted an opportunity to post their first points after a Kasiano turnover put them on the attack just 30m out. Issac Luke forced his way over from dummy half and in trying to prevent the ball being put down, Josh Morris stuck out a foot which resulted in an eight-point try being awarded. Adam Reynolds converted both.

That left it 10-8 at the break. Luke didn’t return in the second half, ruled out with concussion.

After a scrappy opening to the second forty, a handling error from Joel Reddy in his own half gave Bulldogs a great chance to strike. A Josh Reynolds grubber bounced kindly for Josh Morris who collected the ball and swung out of the Inglis tackle to score. Hodkinson added the two in the 53rd minute for a 16-8 lead.

Rabbitohs hit back in the 60th minute in very similar circumstances with front-rower Dave Tyrell scooping up a deflected Adam Reynolds grubber to score untouched under the posts. Reynolds converted to cut the lead to two again.

A penalty against Lichaa in the 70th minute put Rabbitohs on the attack but Adam Reynolds misjudged his kick which trickled over the dead ball line.

Bulldogs had a great chance of their own soon after also on the back of a penalty, starting a set on the Rabbitoh’s 10m line but came away empty-handed.

It was tit-for-tat on the penalty front with another awarded to Souths 45m out. Rabbitohs opted to take the long-range shot at goal and Reynolds was successful, levelling it up with five minutes left on the clock.

From the kick-off a mix-up from Souths resulted in a fumble and from the subsequent drop out, Bulldogs built a set geared towards a field goal. Hodkinson kept a cool head slotting the one-pointer for a 17-16 lead in the 76th minute.

Rabbitohs worked themselves into field goal territory themselves and after Adam Reynold’s attempt skewed to the left, James Graham was penalised for dangerous contact in his attempt to charge the ball down. It was a hotly-debated decision which resulted in an angered David Klemmer being sent to the sin bin. With Reynolds injured, Bryson Goodwin stepped up to slot the penalty from in front. 18-17 to the Rabbitohs with no more than a minute remaining.

A last-ditch short kick-off was also surrounded in controversy after Brett Morris was impeded trying to get to the high ball. No penalty was forthcoming. In the final tackle of the match Brett Morris was left clutching his hamstrung rubbing further salt into the wound.

Bulldogs will be looking to bounce back next Sunday afternoon against the Dragons at ANZ Stadium with kick-off 4pm local time. Check the site for further details. 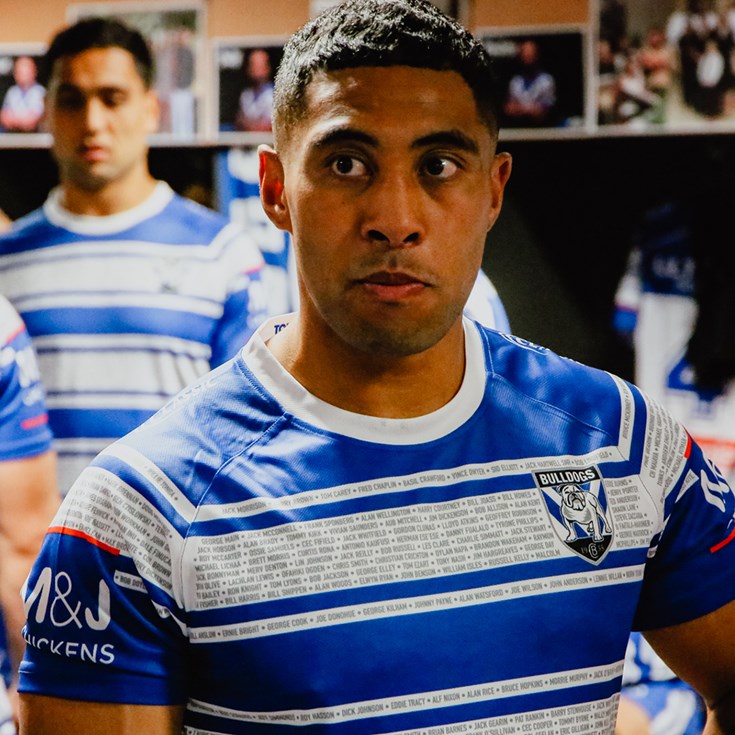 Round 9 Team News: Katoa to make club debut alongside Thompson

Round 9: Bulldogs vs Broncos