The Storm aren't accustomed to playing sudden death football on the first week of the finals, having not finished outside the top four since 2005 (leaving aside 2010 when they weren't playing for points), although their season was technically at risk in the first week of 2009 under the old McIntyre system when a couple of upsets meant the loser of the qualifying between fourth-placed Melbourne and fifth-placed Manly (in this case Manly) went out in the opening week.


It's more familiar territory for the Bulldogs, who after making that 2012 Grand Final – which they lost to this weekend's opponents – finished sixth last year and were knocked out in the opening week by Newcastle.


The Storm certainly have the better recent form – they did enough to account for fellow finalists Brisbane last week despite skipper Cameron Smith spending some time off the park with an ankle issue. It was only an outstanding defensive display from minor premiers the Roosters that held them out the week before and they won their two games before that.


The Bulldogs, on the other hand, have been on a downward slide of late and haven't been that convincing since their seven straight wins from Rounds 4-10 had them atop the ladder heading into Origin.


Their second-half capitulation to the lowly Titans last week had furious coach Des Hasler pulling the plug on his post-match press conference and they've now won just two of their past eight games – both of those against sides that finished outside the top eight.


In fact their last win against finals-level opposition came against Melbourne, of all teams – an impressive 6-4 away win at AAMI Park back in Round 18.


On the fitness front, Kiwi forward Frank Pritchard will be better for a run having come through his return from a pectoral injury last week unscathed, while the Storm will be sweating on Smith's ankle being right for this weekend.


Pritchard plays his second game back from the bench and is joined on the pine by Dale Finucane and Moses Mbye, with Reni Maitua and Pat O'Hanlon sliding out to an extended bench alongside Harlan Alaalatoa.


The Storm have named the same side as last week (with Jordan McLean again named on the bench despite starting that game) with Dayne Weston and Justin O’Neill on an extended bench in what will be Tohu Harris's 50th NRL game. Cameron Smith has been included and will have to past a fitness test on that ankle.


Watch Out Storm: The Bulldogs love to run the footy. No side gained more metres from runs than the blue and whites over 26 regular season rounds; they were the only team to crack 36km worth of running metres with the Cowboys and Rabbitohs next best. No surprises that they were led by the Big Blond Brit James Graham, whose 3,403 metres in 24 games (141.8 metres per game) trailed only compatriot Sam Burgess among all forwards.


There is more to just winning than making the most running metres but winning that yardage battle in the middle goes a long way – especially in a close, grinding game which is exactly what these two sides played out last time they met.


Watch Out Bulldogs: Melbourne's three-quarter line has been firing on all cylinders of late. Last week it was bustling centre Mahe Fonua who proved the game-breaker, with a team-high 166 running metres and two tries. His centre partner Will Chambers is averaging better than 130 metres per game in 2014 and around 150 over the past six weeks. Those two, and Fijian flyers Sisa Waqa and Marika Koroibete, have been the unchanged three-quarter line from Round 19 and combined for 23 tries and 67 tackle breaks in those eight games, making an average of 117 metres per player per game.


With all four fit and firing they have strike power right across the backline and when Melbourne decide to spread the ball left or right inevitably they find a man who can finish the set plays so professionally set up by the likes of Cooper Cronk, Billy Slater and Ryan Hoffman.


Plays To Watch: What happens if this one is as tight as the last time these two clubs met – could we see this one decided by a field goal? The 'Dogs were specialists at it for a while there, winning three games in a row by one point earlier in the year. All up these clubs are equal first for field goals in 2014, with four apiece (level with four other clubs). Each side actually has four one-pointers from eight attempts so there's not much splitting them when it comes to slotting drop goals. Clutch-man Trent Hodkinson missed one he'd usually back himself to get last week before the side went down by a point to the Titans. Cronk is the man for Melbourne if it comes down to it, with three from four this year.


Where It Will Be Won: Possession. The stakes rise markedly this week in sudden death. It's a whole new competition and giving your opponents cheap ball is the perfect way to bring your Mad Monday forward by a couple of weeks. The Storm have been the absolute misers of the error counts in 2014, conceding the fewest handling errors (222) but the Dogs are cleanskins themselves with just 239 (third-fewest). When your opponents aren't giving you free ball – and it doesn't look like there will be too much in this one – you have to make every set count.


History: Played 34; Storm 16, Bulldogs 18. The Dogs have won their past three against the Storm, which includes two meetings this year. That 6-4 win at AAMI Park in Round 18 was their first win at the venue at the fifth time of asking. They have six wins from 15 games in Melbourne overall.


What Are The Odds: Sportsbet has surprisingly received more money on the Bulldogs than the Storm, despite the Dogs awful form. The Dogs opened at $3.40 however punters have obviously seen them as value, with many taking them to win by a margin of 1-12. Latest odds at Sportsbet.com.au.


The Way We See It: If we had to guess (which we do) we'd expect this to be more of a tight, low-scoring affair. Keep an eye on the late mail because the participation or otherwise of Storm skipper Cam Smith will be crucial. If he plays we'll take the Storm by 12 with the Bulldogs well off the boil lately. If he doesn't it comes back to a coin flip between the two but we're probably still leaning to the Storm by a Cronk field goal. 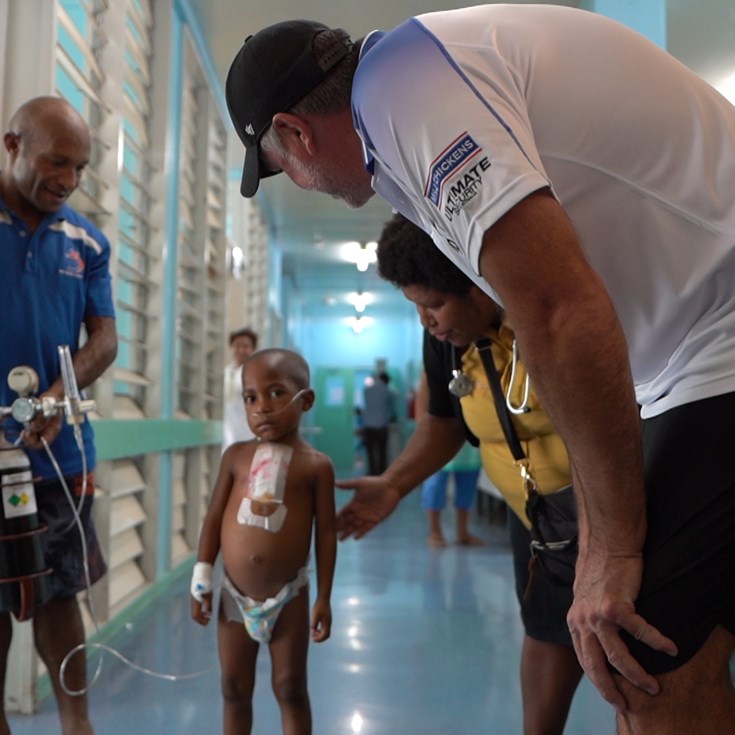 A day in the life of Corey Hori

Okunbor in awe of local support