It came down to the wire but the Bulldogs well and truly earned the key to ANZ Stadium, taking out the CLAIM YOUR STADIUM race. The key to the stadium was well received by our CEO Raelene Castle at half time of our NRL clash against the Parramatta Eels on Sunday.

The Festival atmosphere was not dampened by early reports of rain with both young and old members and fans enjoying the jumping castles, rock climbing wall and Bungee runs set up in the outdoor warm up zone. 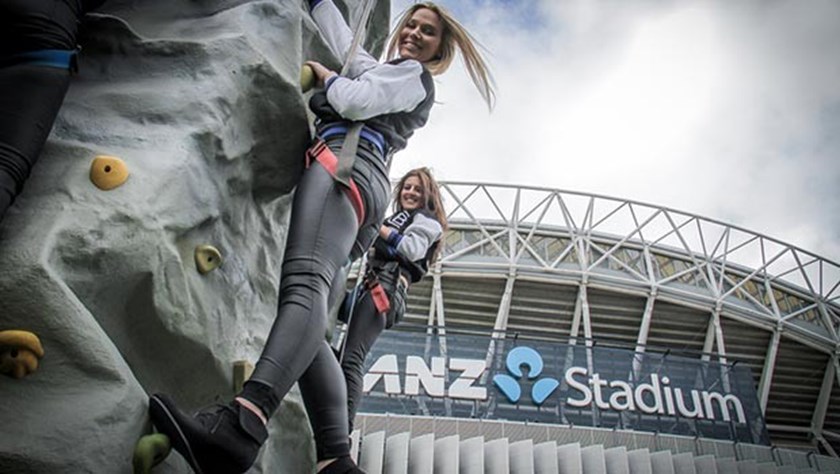 Inside the stadium patrons were treated to stacks of giveaways thanks to gameday partner NSW Maritime and a personalised momento from the game thanks to the team from FlashMe Photobooths. The Sapphires were snapping away again – check out their pics here and see if you were spotted! Congratulations to the winner of the CHECK IN TO WIN competition, Tim Costello!

It was a very historic date in Bulldogs/Eels history with it being the 30 year anniversary of the 1984 Grand Final in which the Bulldogs were victorious. In celebration of this milestone, a number of the members of the Bulldogs side from 1984 coming along to the game to mingle with members in Club 18, appear on field during pre-game and cheer on our current crop of players. We also debuted the first of our members exclusive post match functions in Club 18 with members hearing from Josh Morris & Frank Pritchard who were on hand to take questions and pose for photos after the game. This will be an ongoing offering for members so make sure you head up to Club 18 after every home game.